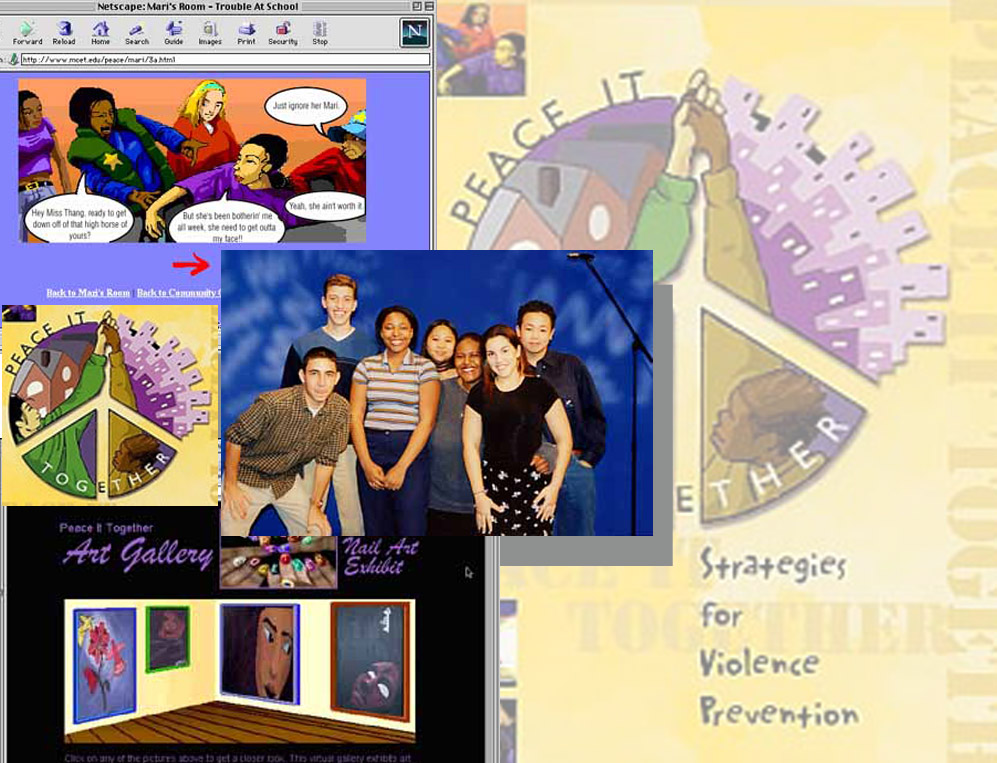 View project components at my wixsite.

As program developer, I:

MCET received a 400K grant from the Safe and Drug-Free Schools and Communities Act, a United States Department of Education initiative, to combat violence in the lives and communities of students nationwide. I conceived of and created Peace It Together: Strategies for Violence Prevention, a 16-part series, that provides innovative strategies for teen violence prevention to meet this need. The series and website give parents, teachers and students access to community leaders and violence prevention practitioners to gain knowledge about violence, its causes and methods of prevention and intervention.

MCET’s approach, targeting youth from 13-17 years of age, teachers, counselors, parents and other vested adults in the community, is multi- technology (video, print, live satellite broadcasts, audio links, Internet) and interdisciplinary. Using the immediacy of the television medium in real time, MCET invites youths into the studio to tell their stories while participants at downlink sites contribute by calling in questions and receiving immediate responses over the audiobridge. This connection is sustained over time online through the virtual community center website and in-person with education and youth-serving leaders.

Comments: “I wanted to create a virtual community center where people could network, build coalitions and advocate for teens. The website received over 20,000 hits a month after the series was completed and many people continued to connect through the Let’s Talk bulletin board. I was once asked if someone could hold their fundraiser at our community center, that’s how vital and lived in this virtual community was! The curriculum kit was sought-after by educators and youth-serving organizations nationwide.” Paula

“As hate crime rates in Boston have risen over recent years, the Boston Police Department has increased its commitment to preventing such crimes,” said Paul F. Evans, Commissioner of the Boston Police Department. “Working together with MCET, our intent is to reach students and community members throughout the city, to influence students against violent crime and instruct them in firearm safety, and to instruct teachers and parents in crime control.”

I want to extend a special thanks to the bright and good-hearted young man Vaughn (Damon) Butler who did all of the graphics for the site. Priscilla Purvis and Charese Williamson were student interns who contributed tremendously to the teen content. Priscilla wrote the Mari Scenarios (a series of comic strips where Mari is confronted by various problems) and was a youth host and peer leader. Charese researched and wrote the Teen-to-Teen section of the site and was the teen moderator of the Live Teen Chats.