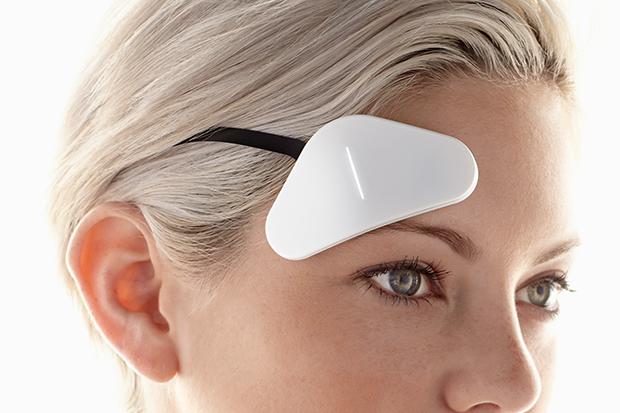 If you could strap on a device that had the potential to alter your mood in just 15 minutes, without any side effects, would you? I explored this question this spring when I was asked to beta test the new Thync wearable for a month, specifically while practicing yoga.

So, what is Thync and how does it work? According to Thync, their wearable uses low-energy waveforms to signal neural pathways, allowing you to unwind and de-stress or to boost energy, depending on the “vibe” you choose. Thync was born out of a fascination with how neuroscience can impact daily life by experts in the fields of neurobiology, neuroscience and consumer electronics. To clarify, the module doesn’t directly stimulate neurons in your brain, but uses tiny pulses of electricity to stimulate the skin at your temple, which then activates the instinctual fight-or-flight response in your brain to indirectly affect emotional response, making you sleep better, feel calmer or more energized, according to Thync. The graphic below  shows the three steps to using the wearable. (Thync has been updated since my initial review.) 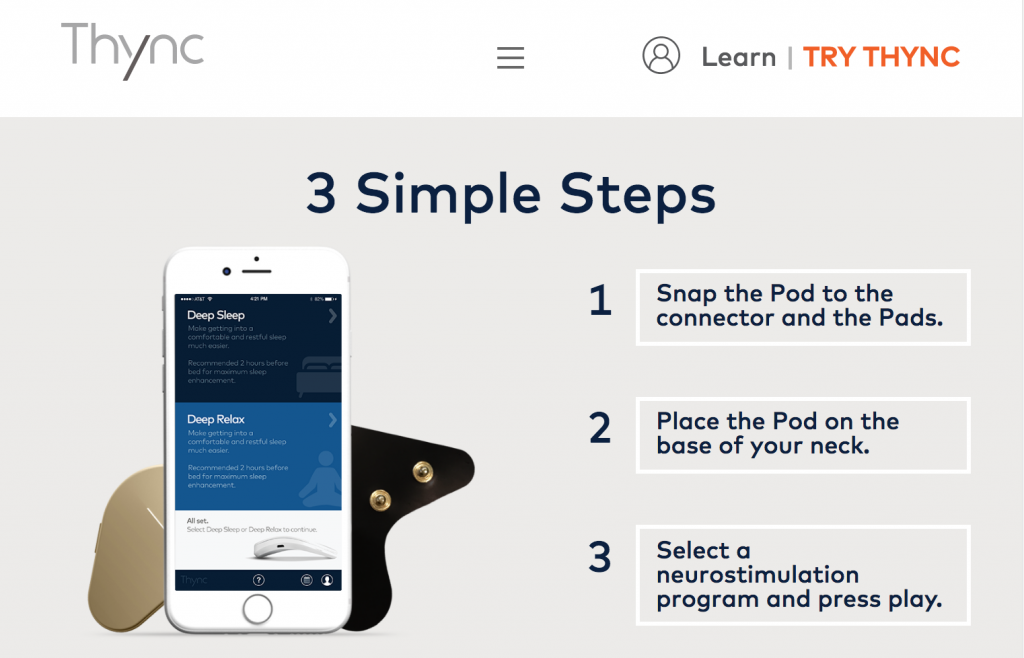 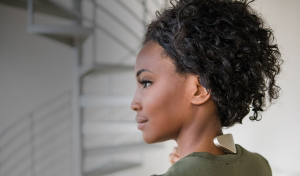 The latest model can run both energizing and relaxing “vibes” from the base of the neck, a welcomed improvement.

Thync is comprised of three components, 1) the Thync module (which in beta testing was referred to as “the puck,” and is now called a “Pod”), 2) the electrode strips (now called Pads) and 3) wire (the Connector). I provided lots of feedback for improving the form factor of the “puck” and am happy to report that the final product is much sleeker, more Seven-of-Nine, conforms better to the temple and feels more secure and less bulky. On the underside of the module are strips that snap into it and are attached to a wire that is attached to electrodes that adhere to your skin via adhesive backing either on the lower part of the bone behind your ear (for the energy vibe) or horizontally adhered just under your hairline at the back of your head (for the calm vibe). The module adheres above the right eyebrow. After you power up the module, strips and vibes are then delivered via the Thync app on your iOS device (it pairs with your Bluetooth).

How Does It Feel?

You feel the sensation of tingling and pins and needles or gentle buzzing that you habituate to, it isn’t unpleasant and you feel it is doing something.

How Did I Respond?

With regard to the Energy vibe, I was what you’d call “a big responder” on two counts, 1) I felt the energy effects profoundly and 2) the effects lasted much longer than the 1-2 hours Thync suggested.

I had a friend try it out for just a few minutes and she had to turn it up to 80% to feel the same tingling sensation I felt at 60%. When I went over 65%, I felt a few unsettling surges and “pops” in my temple. I think this had more to do with the particular vibe setting Thync was testing—one that contained more random energy surges than an even delivery of pulses. I wasn’t a fan of the random surges. It wasn’t exactly painful, just unsettling because it was unpredictable and I wondered what was happening in the underlying neurons. The feedback that I gave Thync was to gently alert the user that a pulse would be coming so they could be prepared. As I was using Thync during active yoga I wasn’t able to look at the iPod and use the graphic to gauge the energy pulses. I suggested that if it is used this way, people would need auditory cues that a surge is coming to reduce any anxiety.

I found the Energy vibe problematic in yoga for a few reasons, the first being that you don’t usually do a vibe for more than 20 minutes and the traditional yoga class lasts 90. One would need to excuse oneself from class to remove the device which could potentially be disruptive to others (not to mention breaking one’s flow). Secondly, you would not want an energy vibe running during Shivasana (where you lie in corpse pose) nor would you want a calm vibe running during energetic flow sequences such as Salute to Sun or during Ashtanga or Vinyasa Flow yoga. When I used Thync with the Energy vibe, I worried that the “puck” might slip off my head during inversions or three-legged dogs and I’d feel a terrible zap. I appreciated the handy, sporty headband they provided to give myself some extra reassurance here (and I felt a little like Olivia Newton John in Let’s Get Physical) but I didn’t like feeling anxiety about the device possibly coming unstuck and found it distracted me from my yoga (even though it did stay on). (Update: It looks like Thync Relax Pro now attaches at the base of the neck for both “vibes,” which is much more convenient than having to relocate the device to change the vibe. Thanks for listening! I suspect people will also favor this more discrete placement, unless they secretly want to be Seven-of-Nine.)

I was too curious not to try this while running, so even though I was tasked to wear it during yoga, I decided to give it a try on the treadmill one day. I predicted that this application would work much better than for yoga and it did. I generally don’t feel sluggish when working out, but I did notice I felt more energized than usual. I wondered if it was the power of suggestion, but my running partner pointed out that my eyes (already big) were open wide and I was smiling A LOT. I was eager to exercise. Now, if Thync can make more of us get off our rumps and move, that is a good thing in and of itself. This quick and brief run was at about 1 pm in the afternoon and lasted for 30 minutes. I ran Thync for 20 of those minutes.

The two times I ran an Energy vibe after noon I had trouble sleeping at night. The first time I felt like I was on amphetamines with a sensation of being wide awake. Not good. The second time I had the sensation of a flashlight shining in my third eye all night long. I’ve heard of people seeing phosphenes during tDCS, and even Thync mentions it buried in their website: “In Energy Vibes the phosphene effect safely activates the retina, causing flashes of light intensity that add to your overall experience” but never after the electrodes are removed and so many hours later! I have to think I am an anomaly to be able to feel the energy effects for 12 hours?! I suspect I’ve got a brain that would light up like a Christmas tree on an MRI and that I’ve managed to productively and creatively channel this energy all these years, but I don’t need it to go into overdrive. The takeaway: The Energy vibe early in the day was fine for me, but not after noontime.

On the positive side, I really enjoyed the Calm vibe. I felt relaxed and calm and this feeling persisted for hours afterwards. I had the “just-out-of-the-bathtub” feeling afterwards and wanted to snooze. In terms of its application in yoga, I did feel the calm vibe aided my ability to relax during my more meditative yoga practices, especially those that involved Prana Yama (breathing exercises) and primarily seated poses as well as during Shivasana (corpse pose).

I concluded that I would mostly use Thync to relax or energize outside of yoga practice since yoga involves both energizing and calming aspects and that would mean the user would need to switch vibes midstream, something that wasn’t desirable or practical. I was asked if I would replace yoga with Thync and knew I never would. Yoga is about generating your own warmth and energy and calm and that is what makes it so transformative. Movement and breathing also have so much to do with these states of mind so just attaching a device to my head will never duplicate that for me. I do believe it is helpful in reaching a profound state of calm and relaxation and I would use it when seated quietly or in repose.

So, are you wondering when you can test drive your own Thync? It is now on the market in a limited edition release. Lucky me, I have one. 🙂 It is set to be available to the general public in the fall.

Update: You can now try it out for yourself and it looks like they’ve made some great design improvements, too. Learn more about Thync.